Ten weeks gestation, and I was finally going to see Steev to break the news in person. How the hell did I wait this long??

Well, he was in the middle of the ocean on an aircraft carrier when I found out, and I didn’t wanna tell him over the phone. Plus, I’d needed the first several weeks to come to terms with the whole baby thing, so that when I finally did tell him, it would be a happy occasion, as opposed to a fit-of-tears-and-despair kinda thing!

Seriously… Several weeks in, I was still in major denial. After my first couple doctor visits, I was still asking him dumb shit like, “But am I for real pregnant, or just maybe pregnant?”

Sounds like a teenager talking, right? Embarrassingly, I was 36. Suffice it to say, I was a little bit in denial, and it took some time for me to get through that first stage of grief.

Ten weeks in, I’d been able to zoom through anger, bargaining and  depression, too. I was pretty much at acceptance by then… and maybe even feeling little twinges of excitement here and there?? Infrequently, but at least they were starting to creep in, right??

So, Steev’s carrier was gonna make a port stop in Valparaíso, Chile, in late October. Then it would be Christmas before he was back in the states. If I wanted to tell him in person, it was Chile or never. I mean, couldn’t really wait until Christmas to break the news… I’d be halfway done by then!

Here’s where it gets dramatic… I arrive in Chile, check-in to the hotel, the aircraft carrier arrives (I can see it in the harbor)!!!…

…then Steev emails to say he can’t get off the ship.

The floating barge the crew was supposed to disembark onto before being transported to the pier hadn’t been constructed properly. The captain had just deemed it unsafe to use.

My heart sank. This couldn’t be happening!!! I hadn’t just traveled down here to have a fun vacay with the hubs. I’d traveled to deliver LIFE CHANGING NEWS!!!! I had to see him.

I commiserated with another spouse while we discussed what we’d do if the crew couldn’t get off. He planned to go home if he couldn’t see his wife.

But, I mean, I was already in Chile, so….. sightseeing, here I come!

Sure, I was discreetly distraught that I might not get to do what I came here for, but was I gonna leave without seeing any of Chile?? Hell, no! (#priorities)

After a couple hours, though, my phone pinged again. It was another email telling me to get my ass to the pier, STAT.

I have never had a more clouds-parted-and-angels-sang-hallelujah moment!!!

Knowing how many of the crew had family who’d traveled thousands of miles to see them, the captain made it work, personally assisting as folks climbed into the transport vessels directly from the carrier. I could’ve kissed him.

My new dilemma: other spouse rode with me to the pier, everyone was hungry, so we all went straight to dinner. Literally no alone time to break the news right then.

And, of course, when we returned to the hotel, I was exhausted. Pregnancy + long travel day + little sleep = totally unprepared to spend hours up answering the barrage of questions I was going to get: when did you find out? How did you find out? Who knows? Blah blah blah…

And, somehow, I really wanted one more night with him, just the two of us. Tell me… how frikkin’ ridiculous does that sound?? I mean, it’s not like the baby was coming tomorrow. Pregnancy does strange stuff to an otherwise reasonable brain…

Next morning: coffee, breakfast, and me visibly shaking with anxiety. Couldn’t believe how nervous I was to tell a guy who’d always wanted kids that I was pregnant!

Back up to the room to get ready for the day, I ask, “Want your birthday presents?”

I sit him down, and pull out my phone to start “taking pictures” as he opens present number one… But only so it doesn’t look so weird when I take pictures (errrrrrr… secretly take video) of him opening present number two! Hee hee…

“A water bottle! HORRAYYYYY! Thanks, baby!” 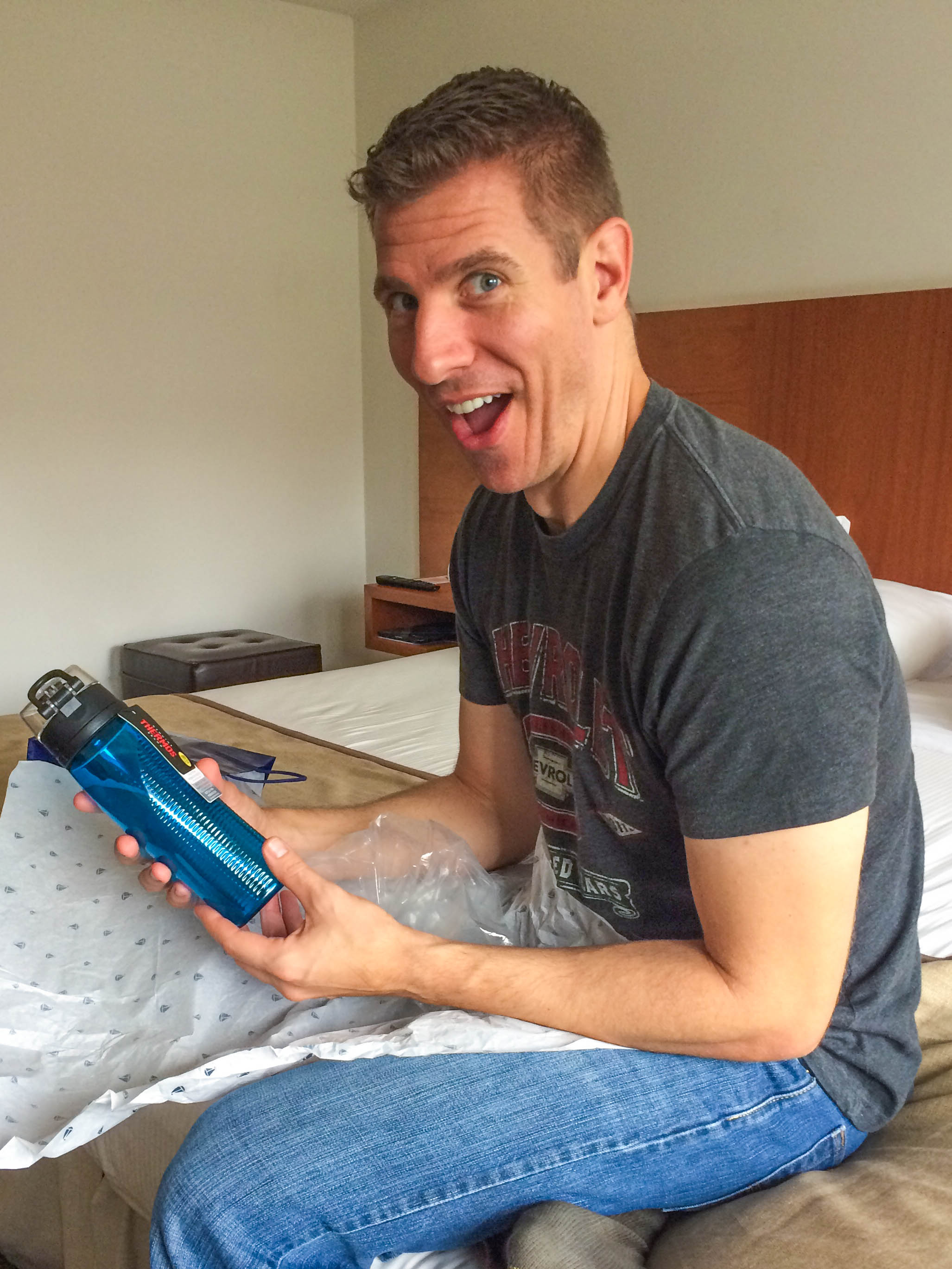 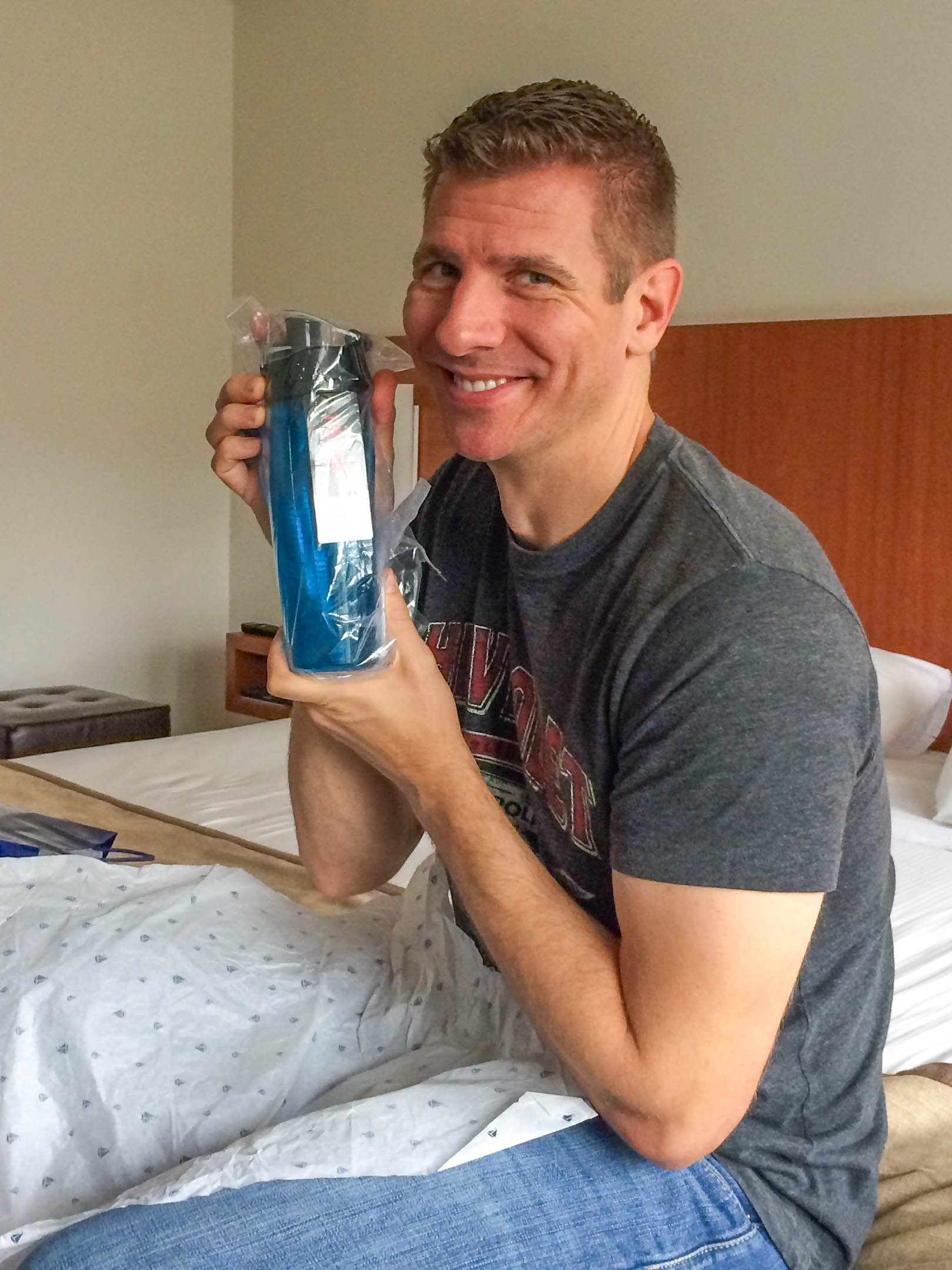 (Side note… my hubs is verrrrrryyyy particular about his water bottles. He’d broken one on the ship not long ago, and it was all I heard about for weeks leading up to this rendezvous. So, this was my “throw him off” gift…)

Ha! Can’t get over his initial reaction… making sure I was okay!!! He eventually got more animated, but there was a lotta mushiness in between. Don’t nobody wanna see all that…

Now to keep it secret from everyone else until we told our families… when Steev returned for Christmas!

I know, I know… I’d be 20 weeks in by then! But could I seriously rob Steev of seeing what I’d just seen?! We were pretty sure the reactions were gonna be priceless. Lemme tell ya… delivering that kinda news to a bunch of people who think you’re never having kids… it’s some amusing stuff. 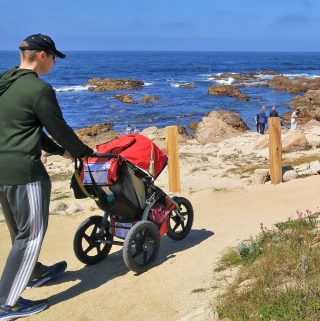 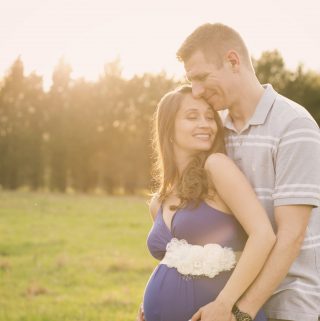 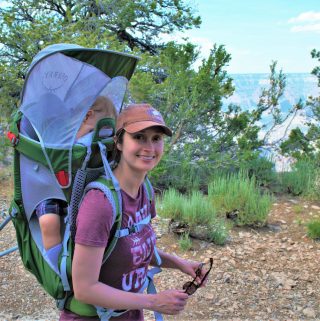